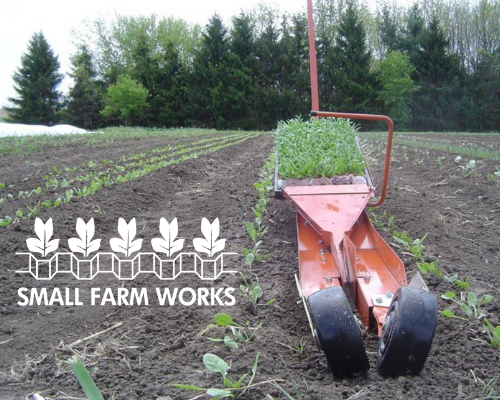 If you take a year off farming to live in Japan, you might just encounter a tool that small-scale diverse vegetable farmers in the United States would find extremely useful. That's what happened to John Hendrickson, founder of Small Farm Works.

Paper pots and paper pot transplanting equipment were originally pioneered by a major Japanese sugar company growing sugar beets more than 30 years ago. Since then, other types of paper pots and transplanters have evolved. Since John began importing the Chainpot Transplanter, many a farmer's jaw has dropped when they first witness this incredibly efficient approach to putting seedlings into soil.

We spoke with John about his company and some additional farm tool innovations he'll be introducing to American farmers. Welcome to the CNG Business Allies community Small Farm Works!

Are you interested in featuring your like-minded company on our blog?

John Hendrickson (JH): My wife has been a student of Japanese language and culture for many years, so we’ve had a long history of being connected with Japan. We got married there while she was finishing up a two-year college scholarship, then returned to the US where we started our family and a small farm. Later we moved to Japan for a year with our two young sons.

Nearly all Japanese farms are considered small scale by our standards. I was driving around seeing all kinds of interesting tools and equipment, and so I started looking for them online. I happened upon a website with a grainy photo of the paper pot transplanter. I was intrigued, but couldn’t quite tell what the tool was for, so I asked my wife to translate. Giving me her best literal translation, she said it’s a “vegetable seedling putting in the ground machine”. I had to learn more.

It turns out the company that made the tool was right there in the town where we were living. We met at their R&D facility where they demonstrated the tool for me. My jaw dropped when I saw it in action. I told them right then that I could sell this tool in the US. Honestly, I think they said yes just to be nice to me. Their idea of US agriculture is huge combines - not small scale farmers. I don’t think they thought anything would come of it.

But farmers did buy the tool! After a few years, I started Small Farms Works to sell the Paper Pot Transplanter, and eventually other farm tools designed to help small-scale farmers succeed. 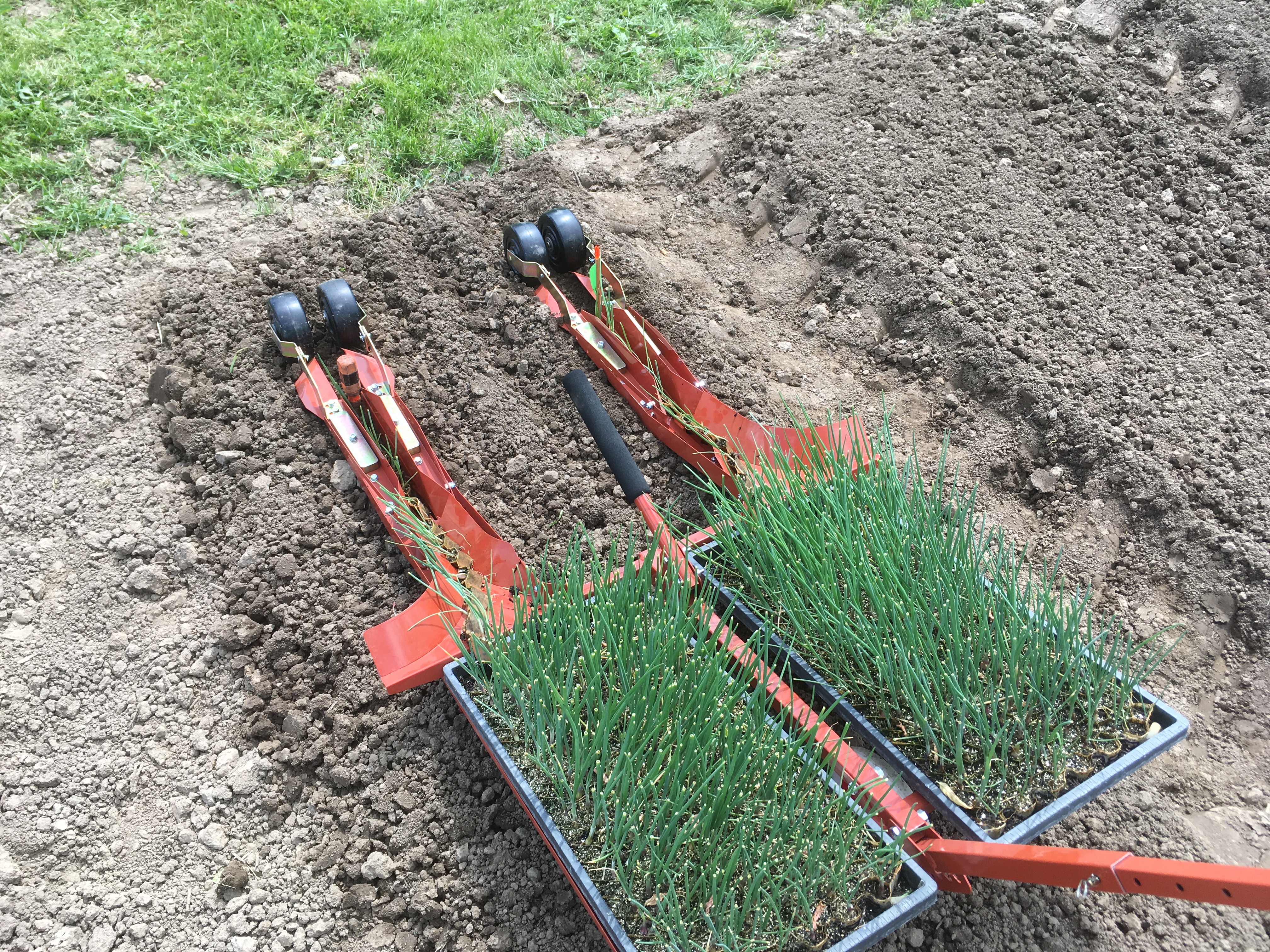 JH: We want to make work easier and smoother to help farms succeed. The company name is a kind of play on words, where our values are embedded. “Works” is an old fashioned word for factory. Although we don’t have things made on the farm right now, I have some ideas in my head that I’d like to fabricate. Also, we want to help small farms work - to succeed as businesses. We do this by helping farmers both be profitable and to work without injuring their bodies, in a sustainable way, while taking care of the soil.

CNG: How did you make the decision to support CNG as a Business Ally?

JH: It was a rather momentous decision to say yes to CNG, actually, because we have been fairly resistant to doing much advertising over the years. If you spend money advertising, then your customers have to pay for that. So when I see companies doing glitzy advertising, it’s a turnoff. But being a CNG Business Ally felt like a good fit. It’s more like a partnership, especially with the opportunity to be a film lesson sponsor, and support CNG’s farmer education initiative. I was actually a CNG grower for a year back in the early days. I didn’t continue with CNG because our coop board decided that all members’ farm products had to be certified organic.

JH: There’s a lot of conversation about how small scale sustainable farms have to have a place in the marketplace. Some worry that multiple labels can be confusing to customers. Perhaps, but I also believe it’s important to have choices, both for customers and especially for the farmers, so they can have their growing practices validated and represented in a way that’s authentic. I think CNG remains an important option, an alternative. This relates fairly significantly to my business, given the confusion - some might say controversy - about the use of paper pots on organic farms. Many certified organic farmers have been given mixed messages from their certifiers, but CNG has been a consistent supporter of this technology, and of the farmers who use it.

CNG: What are some exciting developments at Small Farm Works the CNG community can look forward to? 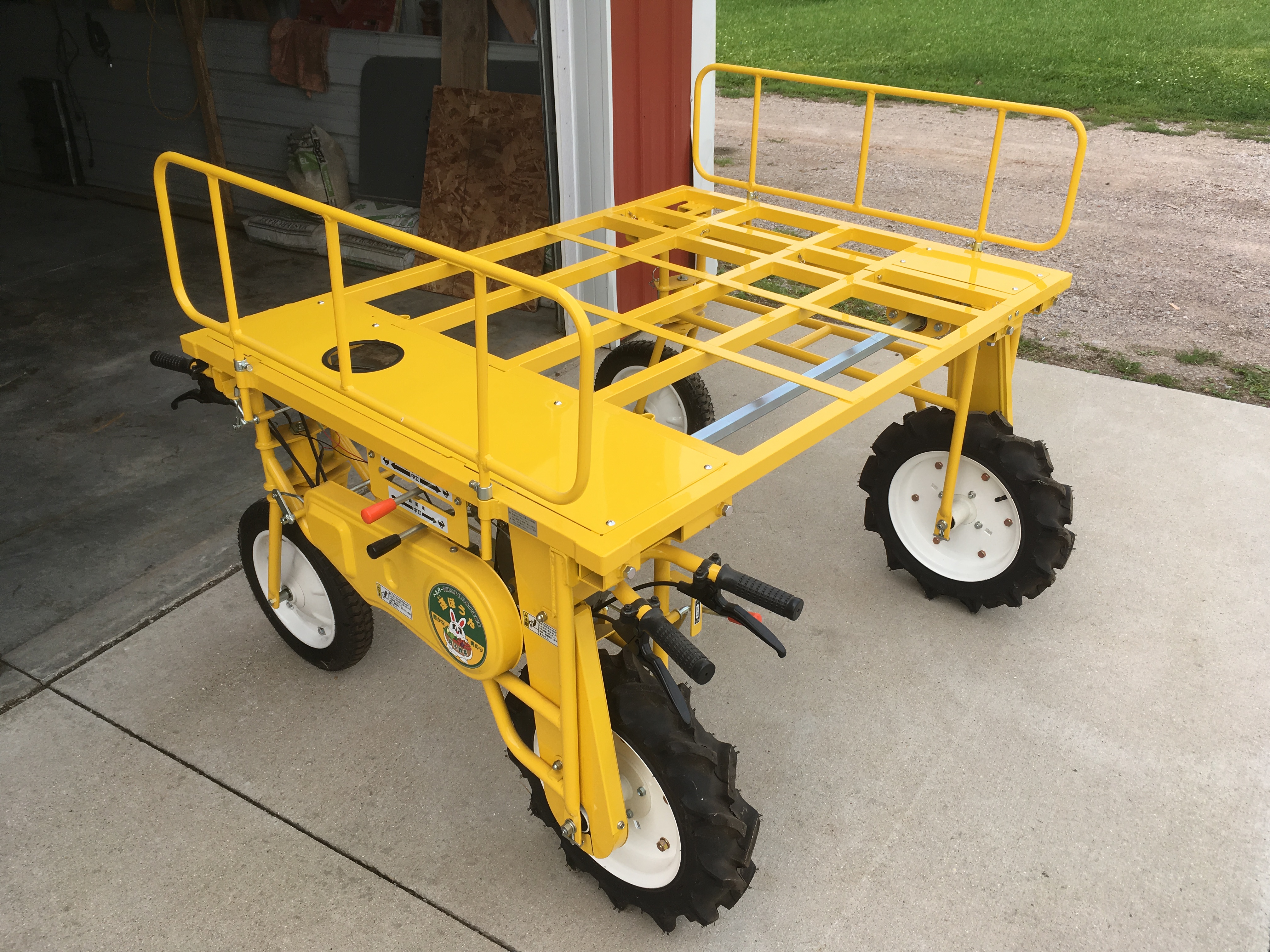 JH: We continue to scour Japan and elsewhere for unique tools and equipment to make available to small scale farmers here. I’ve been impressed with a few Japanese weed cultivation tools, and am excited to offer them this year. Now I’m focused on a new harvest cart I imported last year. It’s a tall platform on wheels that’s motorized. It straddles a bed and moves directly over your crop, which is much better than carrying heavy harvest crates across your fields. When we first looked at importing them we were not allowed to bring over the engine, because it doesn’t meet US emission standards. But we wanted this thing to be electric, anyway. A gas engine would be idling all the time, including when stationary in the field while harvesting. So we’re in the process of converting it to use an electric motor. It has great applications on small farms where you can spend a lot of time and energy moving things around.

CNG: If you had a magic agricultural wand, how would you use it to improve farm systems in North America?

JH: I love this question! First, I would eliminate global warming. And related to this answer, I recall back when farming, my fantasy was a gentle 1 - 1.5 “ rain on Saturday nights. It would come just after market day, at night. And Sunday is a day to do a bit less than normal, so with the rain, you’d feel more okay not going into the field. I would also use the magic wand to pay off everyone’s mortgage, and last but not least, to return land back to Native American communities, because so much was stolen from them.

CNG: Is there anything else we should know about Small Farm Works?

JH: Anybody who has actually called me on the phone with questions will know I love to talk to people, help them figure out the components of the paper pot system, and walk them through a smart purchase, rather than making a blind purchase through the website. My farm business has been put to bed so I’m not currently farming (though I still do some growing and selling) but I’m a farmer at heart. So I love to talk with farmers and share what I learned on my farm that might help them.

CNG: Thank you John for all you do on behalf of farmers and for supporting the work of Certified Naturally Grown.

...are you interested in featuring your like-minded company on our blog?